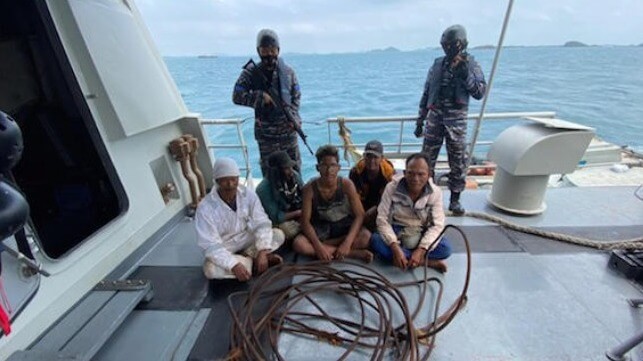 The Singapore Strait remains as the most dangerous route for commercial shipping in Asia after 41 incidents of armed robberies were reported against ships last year, up from 34 in 2020.

The ReCAAP Information Sharing Centre based in Singapore shows that despite a decline in maritime piracy and armed robbery attacks in Asia, the busy traffic lane stretching some 114 kilo-meters remains a major hotspot for illegal activities. Approximately 2,000 merchant ships traverse the waters on a daily basis, making it an attractive area for targets.

Despite the increase in the number of incidents along the strait, the level of severity was not high and the perpetrators have not been arrested, increasing the possibilities that such incidents will continue to occur. According to researcher Adri Wanto of the University of Hamburg, spare parts stolen from passing ships are widely traded at Batu Ampar, Batam, and the local police believe that they lack jurisdiction to intervene.

ReCAAP data shows there were a total of 82 incidents of armed robbery against ships reported in Asia in last year, comprising 77 actual incidents and five attempted incidents. This represents a 15 percent decrease compared to 2020.

“While the overall piracy and armed robbery situation in Asia has improved in 2021, continued vigilance and collective efforts of all stakeholders are the key to making further improvement. To the coastal states, we recommend increased patrols and effective law enforcement as well as close cooperation between littoral states,” said Masafumi Kuroki, ReCAAP ISC Executive Director.

He added that arrest of perpetrators is important to send the message that coastal states take sea robberies seriously. “On the part of ships, they are reminded to report any incidents to the coastal states in a timely manner,” he said.

Apart from the Singapore Strait, the Manila Anchorages and the Sulu-Celebes Seas and waters off Eastern Sabah also remain as areas of concern in terms of maritime insecurity in Asia.